Early Release Reminder:   For athletes who have practice at 3:00 pm on Wednesday, the cafeteria will be available for study hall.  You must sign in at the cafeteria with the supervisor.  There will be no wandering of the halls allowed.  There will be no Open Gym. Once you leave you can not return.  If you are coming after 2:20 pm, you must enter via HS office doors (#1).  If you do not have a sport practice, you should go home. Masks will need to be properly worn during this time. 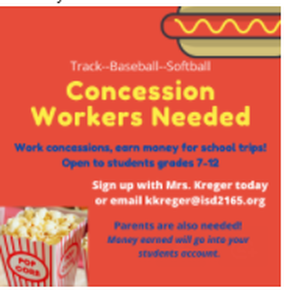 The JV baseball team improved their record to 4-0 last night with a convincing win over Oglivie 12-1 in 6 innings.  The Jags were led offensively by Griffin Stiel, Lane VonRuedon, and Mac Storlie who all contributed 2 hits, a double each for Stiel and Storlie.  The Jags hitters tallied a total of 9 hits and work out 6 walks in the game.  Trey Visser and Lane VonRuedon each scored 3 runs in the contest.
On the mound the team was led by Mac Storlie who threw the first two innings and got 6 outs four via strikeout while just throwing 22 pitches, only 7 pitches in the first to record 3 outs!  Followed by Griffin Stiel who threw the next two innings doing a wonderful job of working out of a bases loaded jam and allowing the only run of the game for Oglivie.  Jordan Masterson and Trey Visser pitched the 5th and sixth innings respectively both striking out two batters in their inning of work.
The theme to our success this season has been our pitcher throwing strikes, as we have struck out nearly three times as many batters as we have walked!  On offense we have scored double digit runs in each of our 4 games, which has been accomplished by hitters battling at the plate and finding ways to score runners when they are in scoring position, and working just about as many walks as strikeouts on the season.
​﻿
The Lady Jags Varsity softball traveled to Sod Field (a real place) last Friday, April 30th, to play the Milaca Wolves.  The Jags were hungry for competition after having a rainout Monday and a Covid-out on Tuesday, and came out swinging.  In the first inning, Emily Stafne doubled, driving in Balut.  Georgia Rice and Jezzalyn Ringler also drove in runners on singles in the first.  The Wolves returned some offensive punch and by the bottom of the 2nd, the Jags were down 6 to 3.  In the 3rd, Jezzalyn doubled in Churchill and Rice to make it 6-5, but the Wolves returned with 3 more runs in their half of the 3rd to make it 9-5.  Both defenses dialed in for the next 2 innings, but the flood gates burst open in the top of the 6th.  The Jags scored 8 runs to reclaim the lead, 13-9.  Reaching base in the inning included Klar, Anderson, Balut,  Brant, Stafne, Churchill, Rice, Hopkins, Ringler, Klar, Anderson again, Balut again.  In the top of the 7th, Rice doubled in Stafne and Churchill for some extra extra insurance and a 15-9 victory.  Joey Hopkins earns the win on the "mound". Life-long LF'er Grace Balut played gold glove brick wall D at 3B, putting out 8 Wolves.  Up next for the lady Jags, is traveling to Upsala (also a real place) in a couple of hours (today, Monday) to play a double header.  Their first home action of the entire season is tomorrow (Tuesday, May 4th) against Braham. 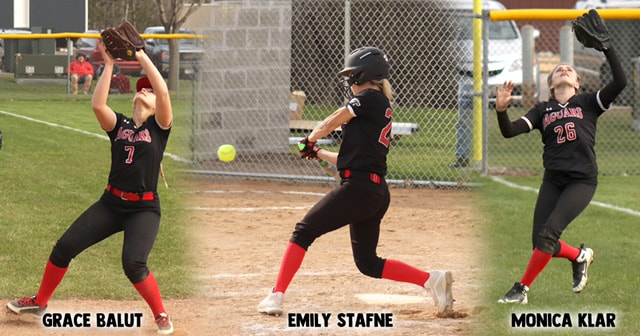 Click here to view the HFHS calendar of events.